Chris Hyde to play his 200th 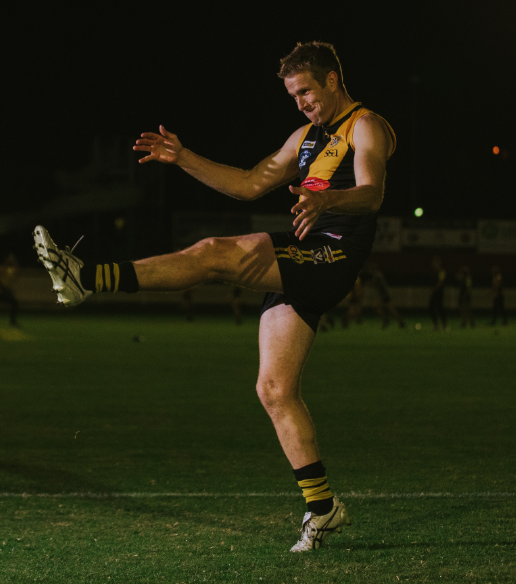 As we approach Chris Hyde’s 200th match for the Albury Tigers Club this weekend against Raiders at the Sportsground, we’ve asked one of our most decorated players a few questions about his footy:

Why is your nickname snags?
Mathew Richardson thought my arms looked like Safeway sausages. No definition at all,  just straight as a Safeway snag and it just stuck.

What makes the AFC such a special place?
The people, the players and its volunteers. Everyone involved at the club made me feel so welcome since the day I first walked in the front door. Over the past ten years there have been people come and go but there is still a core group of people involved who make it such a special place.

What lies ahead after 100 AFL games, 200 AFC games and such a successful career?
Plenty of camping with the kids, chasing kids around with sport and hopefully the odd hunting trip on my own.
Will also pop my head in and have a quiet beer on the hill to watch the boys. Think I would initially like stay involved in some capacity, maybe do the running, but time will tell.

How did you enjoy your coaching experience?
Thoroughly. Think I learnt as much about myself as I did other people. Every person is different and is motivated for different reasons and the challenge is getting everyone on the same page at the same time. When you are able to do that for the most part, that is the most rewarding aspect of coaching. I have been fortunate at Albury to have a great mentor in Paul Spargo and a great group of players who largely coached themselves. The senior players knew what it took to be successful and all the coach needed to do was steer the ship in the right direction.

What is your greatest personal highlight?
Playing in successful teams over a sustained period at Albury.

What do you put your longevity of playing down to?
That I don’t have a fast twitch fibres in my body. I don’t run fast enough to strain anything and I guess I have been lucky in many ways that the injuries I have sustained, I have been able to get over reasonably quickly.

Best AFL & O&M players you’ve played with and against ?
G Ablett was pretty handy.
There have been about 10 players at Albury who have been amazing over a very long period. I don’t want to individualise because they have been enormous and fantastic players in their own right. Some have finished and some are still playing. I respect these guys as much as anyone I have played with.

What are some of your favourite memories in your football career?
I honestly don’t look back very often and never have really been like that. I’m sure one day I will sit back and reflect back, but at the moment it’s not something I have given much thought to, to be honest. In saying that the past 10 years have been an unbelievable ride and I think that it will be very hard to replicate again and I’m proud to have played a small part in that.

Who is your support network that has helped you reach such a significant milestone?
My beautiful wife Peta and my 3 kids. Without their help and support I wouldn’t be where I am today and I want to thank them for all their support and putting up with me, especially on Sundays when I am tired and sore from a game.

Best of luck to Chris and the boys this weekend. It’s been an absolute pleasure watching the last 199 games and the Club appreciates your guidance, passion and loyalty over the years. We hope there’s still a few more games left in you and best of luck for the remainder of the season.

Congratulations on your 200th game.